It may sound unlikely, but on the plot between the EMA office and Van der Valk hotel, just south of the A10 motorway, there is room for an office building with a gross floor area of 30,000 square metres. ‘It will be a while yet, but preparations are already underway’, says Jaap Brouwer, senior urban planning designer for the City of Amsterdam.

We can look forward to another eye-catcher off the motorway. A building of which the architecture is fundamentally different from everything that’s already here, says Brouwer. ‘We’re aiming for a nice diversity of architectural forms – something that’s distinct from the Cross Towers where EY has its offices, from the EMA headquarters and from the beautiful tour-de-force at Van der Valk.’ Planned to rise a towering 85 metres, the new building is actually most striking for its width, with an elongated shape. The taller part of the building will be set off slightly from the A10, creating space for a low-rise section (18 metres high). ‘How exactly that will be fleshed out depends on market demand and the creativity of parties that submit bids to develop this plot’, Brouwer adds.

Although it will be some time before it’s completed, a good deal of thought has already gone into the development of this plot, also known as ‘Kavel 13’. The tower section will have an unimpeded view towards the city, though without blocking that of EMA staff. Logistics will be routed via the road parallel to the motorway (Spoorslag), similar to EY’s Cross Towers. The entry to a slated two-level underground car park will also be accessible from this road. ‘A little inside fact is that parking spaces have already been set aside here for the EMA. Because of the rush to build the EMA office, there was no time to dig a parking garage there as well’, Brouwer explains.

The new building is meant to bring more life to Domenico Scarlattilaan. The arrival of the EMA and Van der Valk have already started the ball rolling. ‘We’ve made sizeable investments in public space around the EMA office’, Brouwer continues, ‘and the new building will tie in nicely with that. In addition, the building’s ground floor won’t be allocated to offices, but to public amenities such as small retailers and food outlets. So the upper floors will be oriented towards the city, the lower part towards the street level’, is how Brouwer sums up the philosophy.

Amanda van Buuren is the project’s legal expert and says Kavel 13 is unusual in this respect, as well. The zoning plan for this Vivaldi subdistrict was first drawn up in 2016 and has to be amended for this project. According to Van Buuren, ‘One important change relative to the zoning plan is to allow an additional 20,000 square metres GFA for offices over and above what had earlier been provided for. This proposed change has been published, so members of the public can submit their input now. If all goes to schedule, the zoning plan is ready to be presented to the municipal council for a vote by March 2021. After that, the preparatory work will continue, but actual construction won’t start until 2024 at the earliest.’

The amended zoning plan for Kavel 13 will also incorporate rules on sustainability, says Van Buuren. ‘These sustainability obligations will be laid down in a document, setting out the extended scope of the zoning plan. For instance, there’ll be a ruling that the building has to achieve a sustainability rating of BREEAM Excellent at the very least, as well as requirements for things like waste collection inside the building, green roofing and solar panels.’ 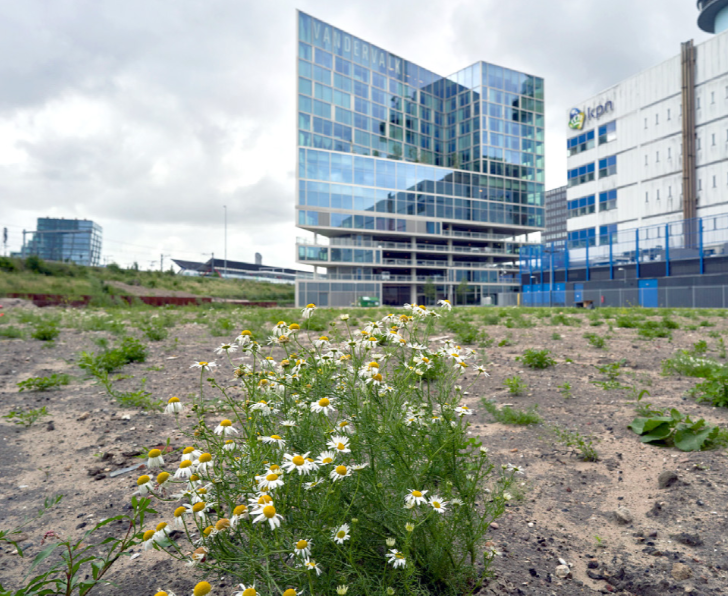 Brouwer expects the Vivaldi subdistrict to become much more closely intertwined with Zuidas than it is now. ‘So many things are poised to happen. The wooden office tower, which you can see when you look up Gustav Mahlerlaan from Parnassusweg, and the child-friendly Ravel neighbourhood extending off the end of Mahlerlaan. These developments will really change the whole character of this part of Zuidas.’